Rann grew up living with Kennedy relatives after his mother Damaris died.  Amongst them was George Kennedy who had built up a reputation as a surgeon in Birmingham.  George worked at the Hospital until late in life. The name George Kennedy is also constantly found in records of commercial transactions from this period in connection with the ownership of inns in the Lichfield and Birmingham area - this is because there was another George Kennedy from the Lichfield line, who was in the Brewing trade.  They were cousins.  Also in these papers many members of the ubiquitous Rann family are to be found.  George the surgeon acquired a handsome property in Acocks Green called Fox Hollies,  very close to the village of Yardley that had been the home of his Dolphin ancestors since the Middle Ages.  George was clearly not only a man of medical accomplishments,  he also had a keen sense of family history. 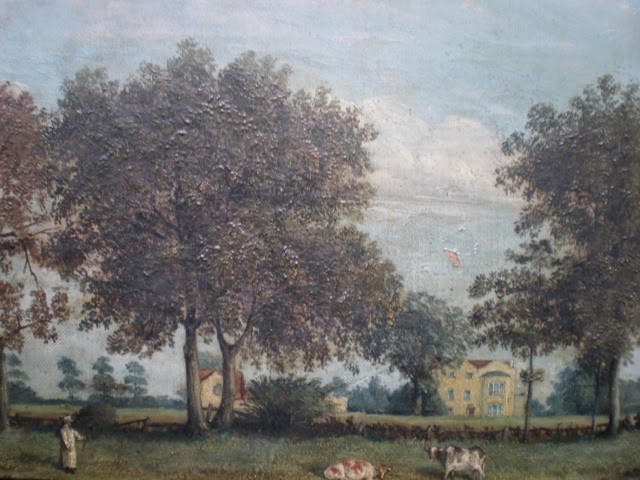 Rann Kennedy was curate of St Pauls in the centre of Birmingham from the early 1790s.  The congregation bought him the living and he became vicar,  from the late 1790s until close to his death in 1851.  St Pauls is a grand and very elegant Georgian church in what is known as the Jewellery Quarter.  Among pew holders at St Pauls at the time were Matthew Boulton,  the industrial pioneer,  owner of the huge factory at Soho  and his partner in the development of steam engines,  James Watt. Watt lived next door to Fox Hollies House.

Rann’s position both at St Pauls and as usher at the King Edward VI school put him very much at the heart of the Church of England establishment of Birmingham.  Birmingham at this time was a city sharply divided on sectarian lines.  Dissent there dated from the Civil War when it was a stronghold of the Parliamentarian side.  In the years after the French Revolution the town’s resident ‘Church and King’ mob terrorised the many nonconformists and free thinkers.  They attacked the house of Joseph Priestley, the famous Unitarian, scientist and philosopher, one of the leading lights of the Lunar Society,  pulling it down and leading him to flee to America.  The Birmingham mob also destroyed Moseley Hall outside the town on hearing that a dinner had been lately held there in honour of the Jacobins.  The permanent occupant was an old and genteel lady with no political connections whatever and the owner of the property certainly had no knowledge of the infamous dinner.  The mob allowed the old lady to leave then literally pulled the place apart.  They also attacked dissenter places of worship such as Quaker Meeting Houses.  In the 1820s the pupils of the King Edward School would clash in the streets with dissenter apprentices.  Rann was certainly a strong monarchist,  as were many of his generation who were horrified by the excesses of the French Revolution.

It was a common thing for poetic clergymen to compose poetry but not to publish their work,  to publish was widely regarded as vulgar.  Luckily several of the works were published during and after his lifetime.  Rann’s poems were highly regarded by literary circles but especially amongst the “Church and King” sections of the population. His poem upon the succession of George IV was read out to a packed theatre at the time by a prominent actor, one Mr Vandenhoff.

One of his poems that has survived concerns the death of  Princess Charlotte.  This poem might be viewed as a (heavily) veiled attack on the then King George IV,  previously the Prince Regent, who was held in very low estimation by many Britons.  He had tried to divorce his wife, resulting in a court case which dragged her reputation through the mud and was the cause of much rioting and protest on her behalf.  Her daughter Princess Charlotte was seen as an innocent amongst the scandal-ridden royal family and some radicals used the opportunity of her death to attach yet more ignominy to the King.

One letter to him that is held by the family is from Samuel Coleridge,  his old friend from University, and is a lengthy critical appreciation of this poem.

Washington Irving,  the American author best known for writing ‘The Legend of Sleepy Hollow’ was a great ambassador of American letters to Britain and Europe.  He visited the Kennedys and became a great friend of Rann and Julia,  finding the rector of St Pauls a lovable eccentric.  Rann would regale his circle of friends with his works which he kept in his head.  Irving was also particularly amused by the educationalist, clergyman, Greek Scholar and academic Samuel Parr, who in his later years was a frequent visitor to the Kennedy household.

Parr was the rector of Hatton,  on the road between Warwick and Birmingham.  He was a cantankerous man who had purposefully modelled himself, as a raconteur, on Doctor Johnson,  though some have said without the authority or humour of that distinguished Lichfieldian. He had met and spent time with Johnson and had managed to parry the inevitable barbs that the old Tory launched in his direction.  He wrote the epitaph on Johnson’s tomb – in fact he did so for Fox,  Gibbon and many others of the distinguished departed.  He was a diehard Whig and had corresponded, or conversed with all of the Whig politicians and thinkers of his era.  He liked to be known as a very particular gourmand,  and he would make fearful demands at dinnertime, much to the fury of Julia Kennedy,  according to Washington Irving.  One project of Parr’s was to preserve a well from which Richard III was believed to have refreshed himself before the Battle of Bosworth.  This was done after much negotiation with local farmers and  landowners,  though the numbers of subsequent visitors to Dick’s Well was not recorded.

Parr was a radical throughout his life.  In the 1780s he was an enthusiastic fund raiser for Charles James Fox.  In the 1820s he was an associate of the Unitarian Joseph Parkes who campaigned for democracy during the repressive period after the Napoleonic wars.  Parkes was hardly the sort of figure that radicals would have pictured in company with Rann Kennedy but nonetheless they shared a very good friend in Parr.

One of their shared interests was education.  Parr had at one time been fancied to take the headmastership of Harrow and the boys there had rioted when he was not awarded the position by the governors.  He went along to talk the boys out of their protest.  This is interesting because he was noted as a strong proponent of corporal punishment in schools.  He was a frequent visitor to Shrewsbury School whilst Rann’s eldest son Benjamin Hall Kennedy was a pupil there, and often attended at prize givings. When Parr died on March 5th 1825,  Rann officiated at the funeral which was in Birmingham.

Meanwhile King Edward’s School had become the centre of controversy.  The headmaster Reverend J Cooke MA was a ferocious disciplinarian and the physical punishments were such that even in those birch-happy times parents began to complain.  The complaints received short shrift from the head.  Rann was one of the principal staff members in charge of meting out punishments.  To be fair physical violence was common in the schools of the period,  much of it dealt out by the boys themselves who were frequently fighting each other – sometimes in class -  or scrapping with locals outside the school walls.  The policy of the King Edward’s School as elsewhere was generally to condone fist fighting amongst the pupils as long as it was a ‘fair fight’.

Education had changed little in the King Edward VI School since the days of Queen Elizabeth when the first post-Catholic education system was put in place.  Classes in the school at the time of Rann Kennedy involved the pupils gathering around an outer railing and listening to the teacher,  usually lecturing on Latin or Greek.  There was some mathematical teaching  but little of any other subject.  French was discontinued on grounds of patriotism.  Classical learning was believed to contribute to building a sound character in a boy,  though the ex-pupils seem to have found Latin and Greek of little direct use in their subsequent careers.  The fact that so many educated men in Victorian England shared a background in these studies led to a profound bond between many of them,  able to converse in their ancient tongues.  The influence of the Classics pervaded the nineteenth century in many very subtle ways and stood for a lot.  In the mid-twentieth century a Kennedy son was asked something in Latin by his great uncle,  and when he was unable to answer the great uncle was mystified that a Kennedy boy was not a classics scholar.

Radicals in the town are said by some writers to have reviled Cooke and Kennedy for their repressive regime.  However when he retired,  he was honoured by the townspeople so it is clearl not everyone felt that way.  Also Kennedy was a prominent supporter of  the campaign for equal rights for Roman Catholics in Birmingham in the 1830s,  so in this respect he was ahead even of the future great reformer Gladstone who at that time was resisting those changes in Parliament.

King Edwards School by Rann’s time had fallen into a dilapidated state. The grant to maintain it was limited by statute,  and therefore it needed to amended by Act of Parliament.  The governors moved for a bill in Parliament to rebuild the school.  Naturally they wanted it to be a Church of England school as before,  with them in control.  The dissenting community of Birmingham protested loudly and used their growing influence in Parliament to try and kill the bill.  The school was in a desperate state - for example a large hole had appeared in Rann’s kitchen floor.

Eventually the bill was ushered through parliament with the Established Churchmen maintaining their grip on the rebuilt school.  The period of this bill was the culmination of conflict between the Dissenting communities of Birmingham and the adherents of the Church of England.  At times this conflict manifested itself yet again in open violence on the streets,  some of it involving pupils of King Edwards School alleged by some to be orchestrated among the staff.

Rann retired from the school soon afterwards,  upon the retirement of Reverend Cooke.  He was too old to succeed Cooke by this time.  Though late in life, Reverend Rann continued to be the rector of St Paul’s Chapel. In the last years of his life he collaborated on some latin translations with the son to whom he was particularly close, Charles Rann Kennedy, who had become a barrister.  The old scholar was still as sharp as ever.  He also finally published some of his own poetry.

Rann Kennedy as a man represented many different and seemingly conflicting things to many people during his life.  To some this poses to the biographer an impossibility.  How can a man be a puzzling eccentric, a profoundly spiritual figure,  friend to a radical,  a devout royalist, a poet,  married to the worlds of theatre and art,  a great teacher, loving father, brutal disciplinarian  and accessory to municipal despotism?   But the fact is that he was all these things and more.  As we glimpse Rann Kennedy in the few remains he left behind,  and in the eyes of others,  his life demonstrates the futility of attempting to summarise a life in a few sentences.